HD? 4K? OLED? QLED? Ultra HD? There are a lot of terms thrown our way when it comes to TVs but this is for good reason. Each time a new version or new technology emerges, it’s an invitation for other brands to head right back to the drawing board to find the next big thing. If you’re confused by it all, we’ve got you covered. Here’s which 8K TV you should buy (and if you should buy one at all).

Just when we thought 4K was the peak of TV experiences, CES 2019 showed us that we’re destined for something even better: 8K. The number alone is enough to impress, and that’s before you’ve even seen the TVs in action.

If you could go back in time and tell all the early adopters of the first modern TVs in the 1930s that 8K would be a reality, they’d look at you in total confusion. Mostly because they would have no clue that “K” would even be an option. After all, their TVs had a resolution of about 449 pixels by 483 pixels. Suffice to say, we are galaxies from that.

Samsung and LG were the front runners at CES 2019, showing off their impressive units and encouraging us all to dive in and buy an 8K TV. However, it was LG that originally wowed the crowd by sharing their 88-inch 8K OLED TV back in 2018. At that point, it was a distant future idea; a mere concept that we could only imagine being used by big brands rather than in our own living rooms.

And there is good reason for that. When you look back at the progression of resolution in TVs, it seems like 8K came around far quicker than any other update. In fact, plenty of cameras and video devices are still using 4K ability as their main selling point. This only begs the question: are we ready for 8K? Is our connected world ready for it? Or is this just too much for our eyes to consume?

For those unfamiliar, 8K is the next step after 4K, but don’t let the numbers confuse you. Did you know: 8K is actually four times the pixels of 4K? It’s not twice the pixels, as many people assume.

If you’re having trouble picturing it, so were a lot of other people. Experts say it’s best to imagine four 4K TVs in a square, all synced to display a single image. This gives you a rough idea of the incredible detail that an 8K TV can display.

If you’re still having trouble imaging it, here’s what it looks like in real life: 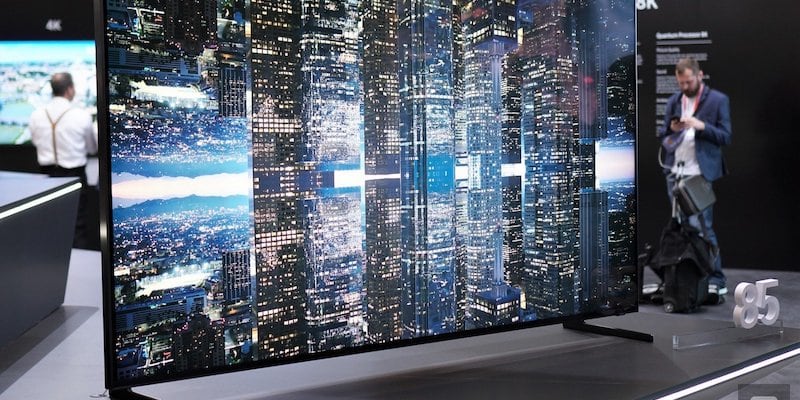 You may be asking if we, as the consumer, really need 8K as an option. A great way to understand the magnitude of 8K is to relate it to 4K and 1080p. LG was the first to announce 4K back in 2012 and it effectively quadrupled the pixels of 1080p. The consumer base collectively went nuts, to put it plainly. The new resolution of 4K instantly became the new norm for camera companies like GoPro. So, to put that into perspective, 1080p is still the highest resolution used by most videos on YouTube which is enough resolution for just about any video.

To answer the question, yes, 8K is a lot better than 4K.

When there’s a new technology on the market, it can seem like brands are racing to get to the consumer finish line. They each put forward products that compete on features and price or, sometimes, they simply want to be the first to market. With all of the specs, information, and product names, it can be overwhelming to try and navigate, especially if it’s your first 8K product. Here are the best 8K TVs so far:

Big and bold, the incredible Master Series ZG9/Z9G features Sony’s X1 Ultimate Processor. With this, the 8K TV produces high brightness to complement the detail of 8K, giving you a superior overall image. Available in 85 and 98-inch options, this TV is designed to blow you away. Thanks to the 8K X-tended Dynamic Range PRO, bright scenes appear perfectly bright while dark scenes are dark without diminishing visibility. If you’re thinking this TV is answering your every request, you’re right. It also has voice assistant integration so everything you want to watch is just a command away. And don’t worry; on the front are four built-in speakers to throw you right into the action.
Price: $12,999.99 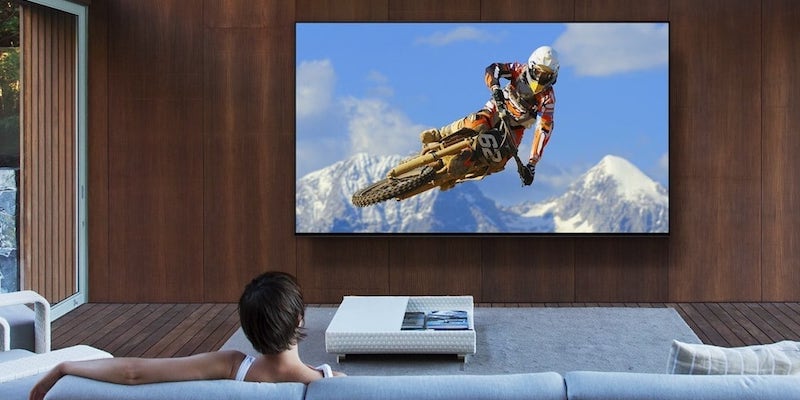 If budget isn’t an issue, the LG Z9 should do just fine. This power 8K TV is complete with a large OLED panel. It’s actually the biggest panel of its kind from LG. Offering perfected blacks and what the brand can only describe as “infinite contrast,” you get an insanely realistic picture. It’ll make it feel like anything on the screen is in your living room. Unlike some other 8K TVs on the market, the LG Z9 has a Contrast Modulation (CM) level of 92%. In layman’s terms: each line is crystal clear for unparalleled clarity. This means you’re getting true 8K resolution. And, if you’re limited on 8K content, you can still use this TV for better resolution. The LG Z9 features an α9 Gen 2 Intelligent Processor to upscale content to 8K without losing much quality. All of this comes in an exceptionally slim design to fit in with any space.
Price: $29,999.99 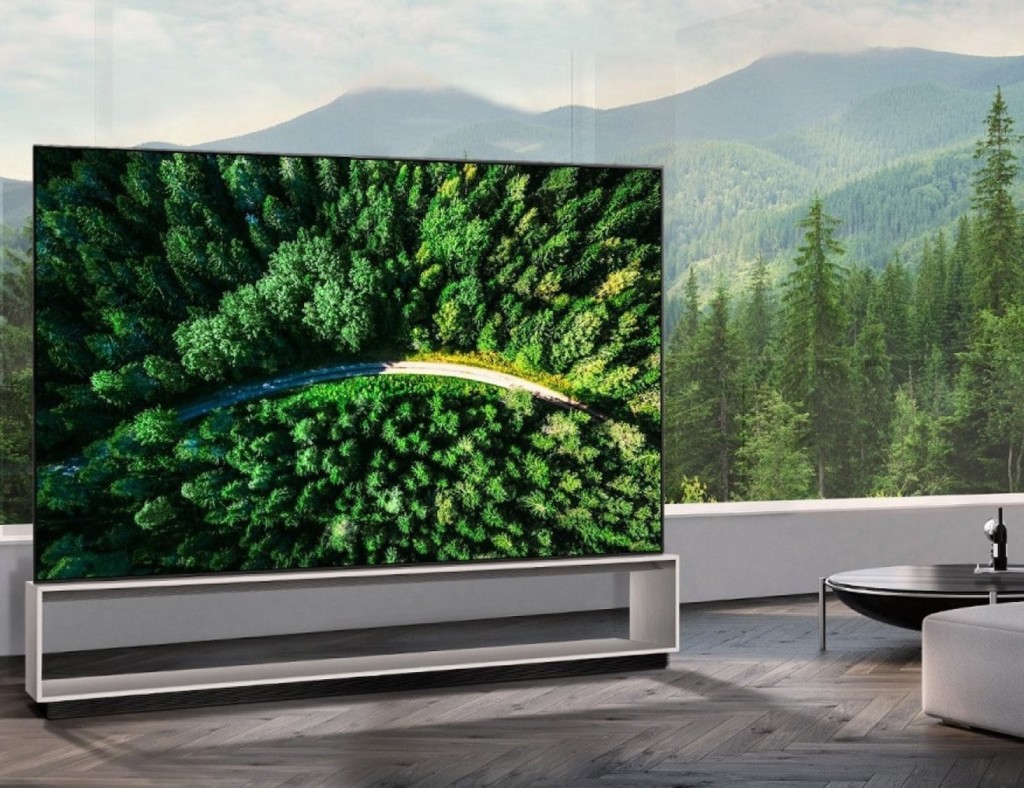 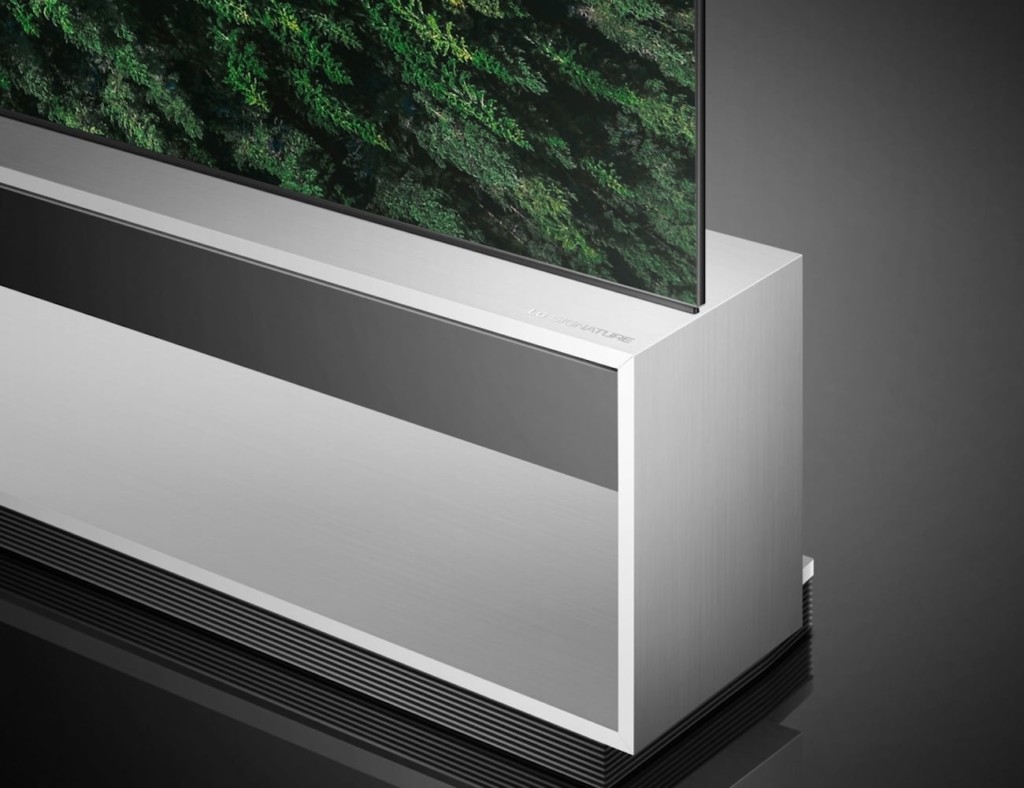 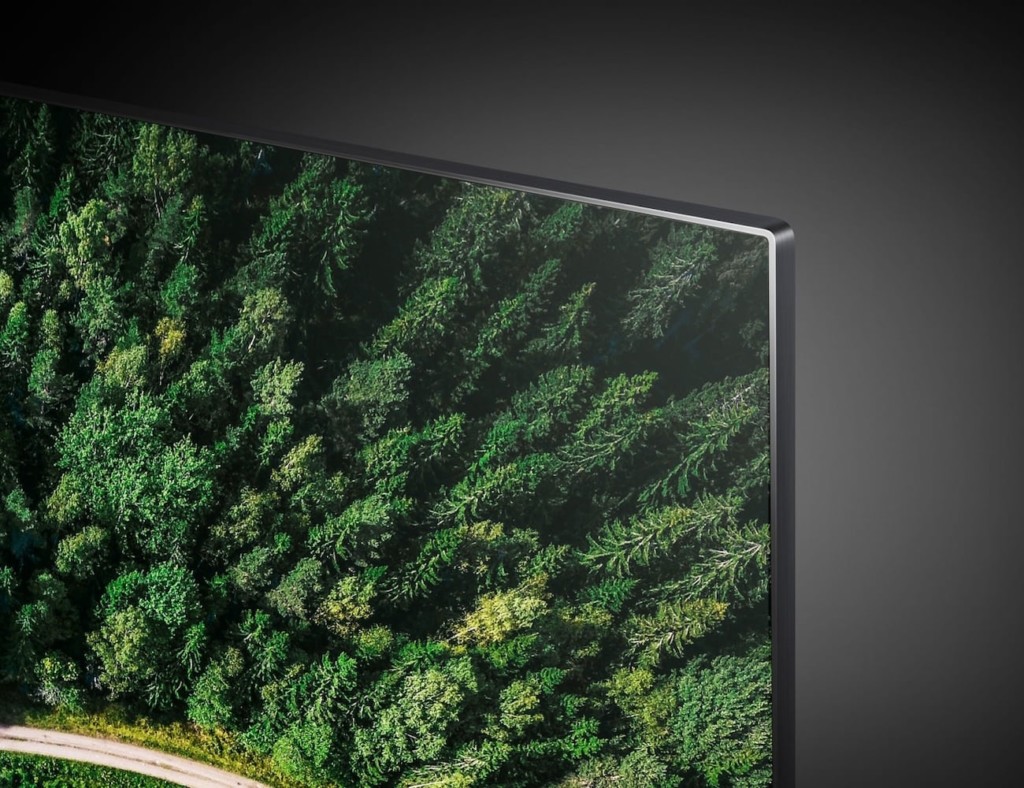 The Samsung Q900 takes all the latest technology and puts it into one incredible device. It’s the most affordable on this list, although you wouldn’t know it. Achieving true-to-life picture quality, this 8K TV offers real 8K but also uses AI for 8K upscaling. Thanks to the Quantum Processor 8K, it pairs the perfect audio for the high-quality image. And, with Quantum HDR 24X, you’re sure to get superbly deep colors and exceptional details. It does this by utilizing concentrated zones of LEDs that are precisely controlled. This TV comes in sizes as small as 55 inches. However, you could always go for the 98-inch version, but that’ll cost you nearly $70k.
Price: $2,199.99 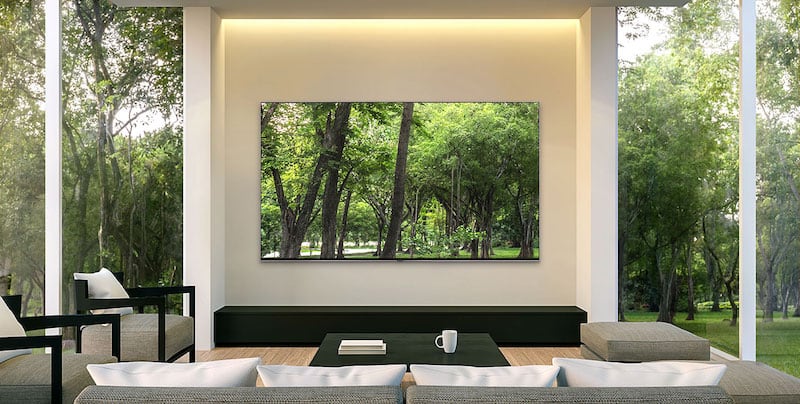 The term “NanoCell” sounds like something from 2001: A Space Odyssey, but it’s a type of technology that is available here and now. While 8K provides four times the resolution of 4K, Nano Color Pro heightens blacks, brightness, and contrast all around. It offers a wider color gamut than other TVs on the market, meaning there are more colors on which you can feast your eyes. The Nano 9 Series also sports a full array backlight that dims and brightens with precision according to the image on the screen. This helps provide deep blacks and contrast for a more true-to-life image. As a result, you see scenes as if you were there in real life. Even with all this power, LG made sure to keep things crisp. It uses an intelligent processor for six-step noise reduction, offering total clarity.
Price: $4,999.99 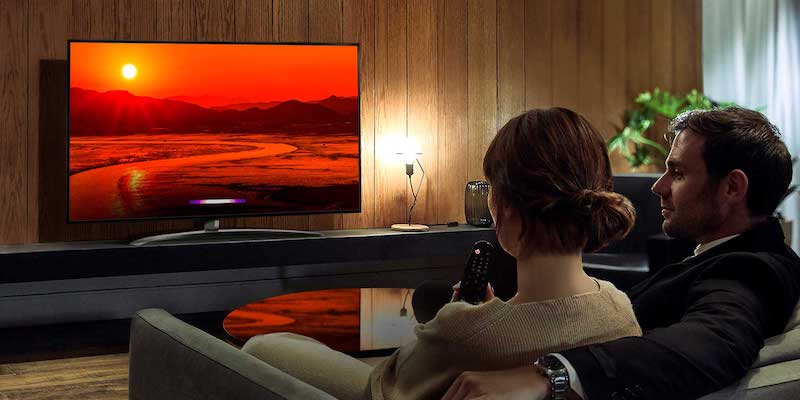 While not quite available yet, TCL announced the X Series 8K TV, a QLED TV, at CES 2019. With Quantum Dot technology, the X Series can produce up to 300% more contrast control zones. Likewise, the TV uses AI and voice recognition to streamline your TV enjoyment. With an always-on far-field mic array, the TV is always tuned in to cater to your every entertainment desire.
Price: TBA

When there’s a new standard in TV resolution, the demo content might be what sucks you in but it certainly isn’t something you want to watch on repeat. You want to watch and rewatch all your favorites, in all their 8K glory.

In December 2019, Japanese broadcaster NHK launched an 8K-only TV channel. Every show and film aired on this channel is delivered in 8K, perfect for those with 8K TVs. Film classics such as 2001: A Space Odyssey and My Fair Lady, both of which were originally made in 70mm, were the first to be broadcasted. The channel also aims to add nation-wide and worldwide event coverage, making the channel more practical for most viewers.

If you don’t live in Japan and the content you want isn’t available yet in 8K, there’s still an option. When you buy an 8K TV, you should consider one with AI upscaling. This means that it can optimize non-8K content to be very similar to 8K. This is an option for 2K and 4K content. It works by analyzing and calibrating the source of the content. Then, it upscales it to 8K and enhances the result, finalizing the content with a polished and optimized 8K image. Obviously, upscaling 2K or even 4K content isn’t going to equate to real 8K, but it’s certainly a great option if you’re an early adopter waiting for fresh content.

What are the limitations of 8K

It’s clear that there are limited options for content when it comes to 8K. As we mentioned, 4K is still the standard most devices strive for, meaning 8K is beyond their reach. Likewise, there needs to be a demand before production companies make 8K their new standard. It’s a bit like the chicken and the egg; companies need consumer interest but the consumer needs enough content in order to be interested. 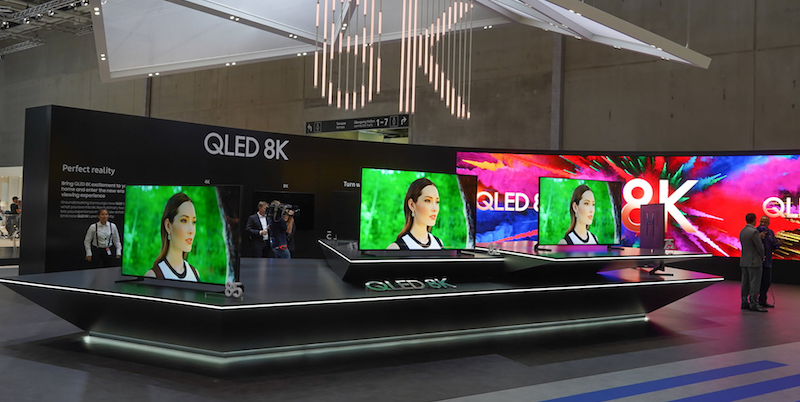 Of course, having a dedicated channel to 8K seems like a great idea, but it’s restricted to Japan. For those with 8K TVs looking for content, the internet will soon be prime real estate for fresh content. But, you’ll need to make sure you have the right internet speed requirements in order to guarantee the quality.

For 4K streaming, you need internet speeds of about 20 Mbps for a smooth experience. For 8K, you’re looking at needing at least 50 Mbps internet. For many, this can be an issue. But it’s not the only issue. Even if you have adequate internet speeds, you probably have a data limit. According to How-To Geek, just an hour of 8K streaming can use 75.2 GBs of data (depending on compression).

What comes after 8K?

This is an interesting discussion. While the human eye can take in 576 megapixels, it can only process about 40 megapixels. And 8K is about 33 megapixels. In contrast, 4K is 8.5 megapixels. Clearly, the progression of TVs is expanding at a rate that we can barely keep up with. As a result, there may come a time where the resolution of the TVs is surpassing what we can even see. At that point, it would seem superfluous to even continue the expansion.

The level after 8K is 16K. This resolution is 15360 pixels by 8640 pixels. AMD is one of the first brands wanting to skip ahead to 16K, hoping to achieve a 240Hz refresh rate for true immersion in virtual reality.

Sony also debuted a 16K display, and it measures an incredible 17 by 64 feet. It’s due to be released in Japan (just in time for more 8K TV channels!).

Should you buy an 8K TV?

With brands like Samsung, Sony, LG, and TCL fighting for the top spot, we’re excited to see how the world of 8K TVs will evolve over the next few months and years. We’re sure that we can expect even more AI integration, much like other smart devices in our homes. It seems silly to advance in resolution yet not grab onto the smart home trend.

The more brands that produce 8K TVs, the lower the prices will be without compromising features. If you’ve got the money to spend, being one of the first of your friends to buy an 8K TV certainly isn’t a bad thing. If you’re trying to figure out if it’s worth it, then you may be better off waiting and seeing what accessibility arises for 8K content.